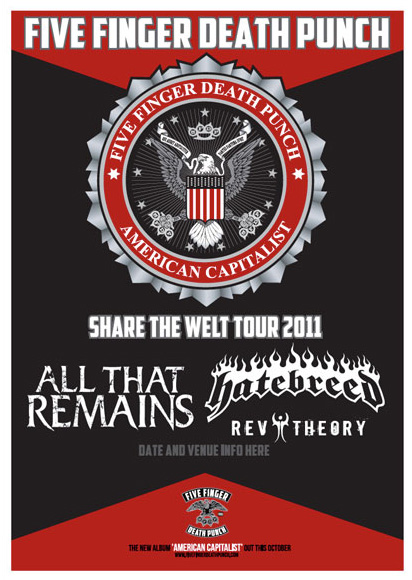 (New York, NY) “”  HATEBREED have confirmed a handful of tour dates on the  “SHARE THE WELT TOUR” supporting  FIVE FINGER DEATH PUNCH and  ALL THAT REMAINS. Tickets for these dates go on sale this weekend to the general public, but VIP packages with pre-sale tickets will be available at  5FDP.com starting Wednesday at 10am CT. More dates TBA.

HATEBREED released their self titled record in 2009 to plenty of critical accolades. Most notably, Revolver Magazine declared the band  “The Biggest Band in Hardcore” in their cover story on the band.HATEBREED released a few music videos supporting this album, most notably for their single  “In Ashes They Shall Reap” which can be seenHERE.

HATEBREED “S/T” can be purchased on iTunes  HERE.